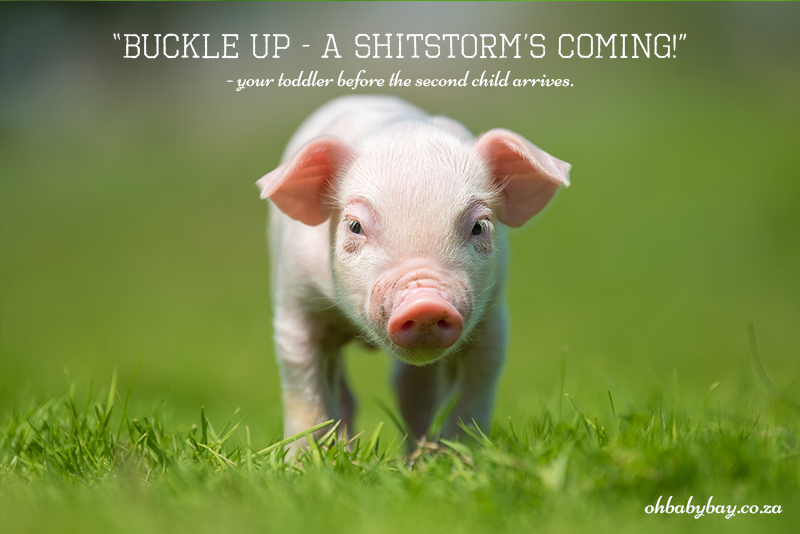 Read Time: 3 mins (Short & sweet because we have zero time these days!)

This one dude asked what it’s like to have a second baby and the dad replied ‘It’s like you’re drowning and then someone hands you a baby’.

In this time, you will drop plenty WTF-have-we-done, several I-hate-these-bastards, the odd do-you-think-one-of-our-parents-would-want-them, and one or two I’m-gonna-drop-kick-this-one! And worst of all, it isn’t because of the newie (newborn), it is the two-ie (terrible two year old) that turns demonic.

Let me take it back a few steps, especially if you are about to have your second child and you are reading this and breaking out into a sweat. The birth of the second bubba is an absolute breeze in comparison. You don’t give a rat’s ass about the way it comes out (natural or Caesar – unless of course you are trying for a VBAC). You don’t over complicate what goes in your hospital bag, or spend a million rand on your baby’s room. You don’t fuss about the breastfeeding, where the thing is going to sleep or the freagin’ sleep routine. And all because you just don’t really have the time. In this way, it makes the second rat’s arrival a gazillion times less pressure, stress and anticipation. This is also the very thing that makes all the things you didn’t wax the first time (like breastfeeding), that much easier because you just put your head down and confidently wing it.

You also tend to cut out all the spoilings that made your first kid a bit of a pain e.g. sleeping in a dead quiet room, a room that is so dark that you have to silently feel your way back to the door, on your hands and knees, without breathing incase you wake it up. This round … “sleep where you are laid to rest, don’t ask questions and if you open your eyes and it is not ‘awake time’ you will be left to raise yourself”.

The first 3 months, the newbie just does its thing. Sleep, shit, sleep, boob, more shitting. And in this time, the two-ie starts firing up its bullshit and plotting its irrationality revenge for bringing this extra turd into the mix. Oh and a very important side note, they just seem to know that something is on its way when you are preggers; they act out, they stop sleeping through the night and just become general azzies (assholes) – just so you know … totally normal and the best advice I have is accept it and don’t ever under estimate the power of taking 5 deep breathes.

You often hear the phrase “terrible twos” but you could never possibly imagine how irrational these buggers are. It is a serious case of Katy Perry “You’re yes then you’re no, you’re in then you’re out, you’re up then you’re down”. With every melt down, and trust a girl, they start to come fast and furiously with a second child, all I can hear is Vicky Pollard’s, Little Britain, “yeah but no but yeah but”. Your toddler has no effing clue want it wants but it wants it NOW! They are completely and utterly offended by life and no matter what you do, you can’t win.

I read a really interesting article the other day about strong-willed children and the highlights package of it was; the strong buggers need to think that they have options so give them two acceptable ones so that they feel like they have a little control. After their choice, there is a consequence. So for example, the little punk won’t get in the car because she is jolling and you need to leave. The appropriate response in this situation would be to say “Ok sweet child of mine, you have two options. One you can carry on playing but then we are not going to swimming OR you can get in the car, I will take you to swimming and we can come back and play afterwards”. In a perfect world the toddler makes a choice and you carry out the consequence.

Most of the time you end up resorting to “Two choices – you can choose a hiding from the right hand or the left if you don’t get in the car before I am done taking my 5 deep breathes”. My hubby says his biggest problem is that he is not creative enough to come up with a second acceptable option when he is fuming at the unreasonable toddler (haha). Buuut having said that, with a little practice using this tactic, you can actually win … at least 20% of the time.

So with the second child you completely lower the bar, you refrain from judging other moms because suddenly your little azzie is not sleeping through and you have to feed him at midnight because your options are sleep or burn the midnight oil on your own; rocking, winding, dummying, singing, hissing and eventually crying. It’s a dark time this no-sleep zone and it slowly starts to chip away at your personality. I knew I was in for shit when I stopped being super polite to the toll gate people because I had no energy in me to say “lovely earrings you have on today”. Fatigue makes you not so kiff!

We are nearly 6 months in with the second little dude and we have slowly come up for air. The great news too is that hubster and I are friends again after a little team work. Holy smokes your marriage takes the heat round two because suddenly your hubby is experiencing what you had the first round. It is a total game changer because it is now all hands on deck. Your hubby goes from being a babysitter to a parent and it eats them alive. You have to SERIOUSLY remember to take a time out if you have the luxury of such things and do anything child-free otherwise you start to lose each other in the mountain of nappies, whining and crying and general siffness that comes with a double batch of lighties.

Another very important pearl of wisdom, don’t bank too much on the first rat being like the second because that’s when the frustration really sets in. My first kipped through the night from 8wks … this oke … not having any of it. We used the exact same tactics and yet they are completely different! Accept it and learn to make the most of it. For us, the buck stops at 2 and because we aren’t planning on any more, it is for this reason I have also tried my best to soak up the newborn phase. He gets sniffed, and loved and cuddled and it has been easy to love the hell out of this newie this time because you realise they aren’t as fragile as we make them out to be and I think we have a better sense of the time frame. Newborns can be soooo rashy but it isn’t forever! There are some other treats in the pipeline … like azzie two year olds.

Before I attend to the one screaming its pip off in the background of this blog, I wanted to leave you with some goodness. There are going to be days when you want to throw in the towel or strangle someone with it but if you can try your best to accept the shit you cannot change, the fight is not as hard. Try your best not to let your rats divide and rule and most importantly, laugh at yourself and laugh especially hard at your kids. They can be such knobs but they honestly get better and better and you just enjoy them so much more.

Give your first born a shite-load of attention. Their entire world has been rocked. They have gone from being the centre of attention to having to now fight their way past a suckling pig (breastfeeding infant incase I lost you there) and it is a serious serious serious change for them. And at the end of the day the little newie blob isn’t going to notice if you dust them on the couch for an hour or two while you try and make your two-ie feel like their colouring-in skill is their ticket to a tertiary education bursary. Try your best to stay friends with your husband, if only because there are two of those buggers now so it is safety in numbers!

You will rock this … fake it ‘til you make it. Be confident with your kids so they don’t smell the fear and together, you and your partner, will take them down.

Azzies are doing it for themselves.

Two kids … a walk in the park they said!