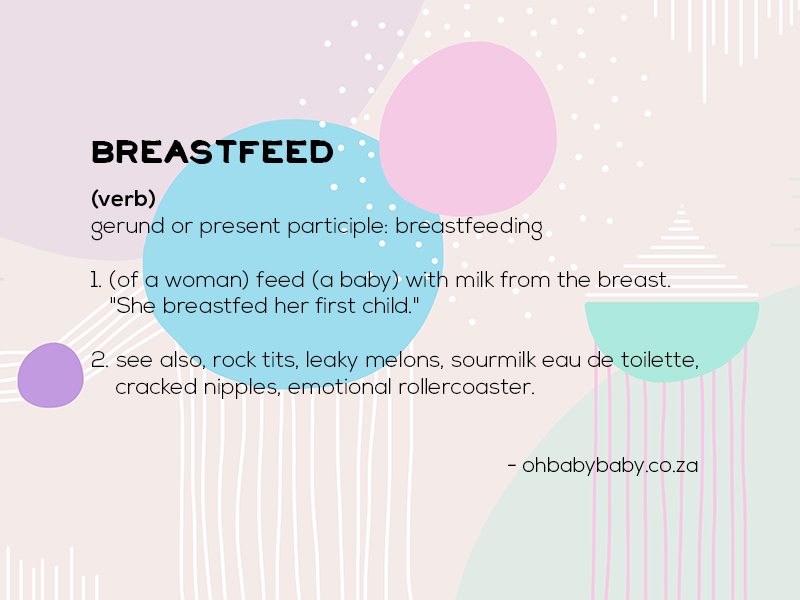 Boobing … who knew it would be such a blady complicated event?

OBB1 | Nailed it but mentally couldn’t crack it past 5 months.

The best advice I ever got was from a lovely little angel that appeared out of nowhere in hospital with an infrared light to laser my nipples on the second day of boobing. She so rightfully said to me, “breastfeeding is actually not as easy as it looks – most women think it is innate but it is definitely something that needs to be learnt and perfected”.

Now, if you are sitting with noombies like mine you will know the struggle is real. Over the pregnancy, they absolutely exploded. Porn star would be an insult! And when the milk came in … holy smokes, my child’s head looked like a tiny gem squash in comparison. So I loved the idea of being shown how to breastfeed off each boob, with its own uniqueness. While the right stood straight, confident and leaked like a tap at a beer festival, the left had dropped slight in a South Westerly direction and started taking shelter under my armpit. Ol’leftie was affectionately referred to as “The Dud” and I had to learn how to breastfeed using the rugby ball position.

Not much of a sportswoman myself, how would I have ever had known that if I hadn’t been shown? Boobing definitely comes with its own set of skills and maybe thinking you will nail it straight off the bat could potentially be fatal for your boobing adventure. To state the obvious too, boobing is also a huge mental game, so here is my (OBB1) take on it.

The first few nights, after the milk had come in, I had so much of it that I had to sleep with newborn nappies in my bra because I would wake up drenched in siffy boob juice if I used breast pads – real story! Aaaaaaah I hated it and on top of it, I had had a Caesar so I was rocking that gross bandage across the bottom of my stomach and of course changing those ‘surf board’ pads (maternity pads) like I was handing out freebies on the beach in December.

Boobing also comes with MAJOR hormones and I honestly can’t stress this enough. The crying surges that come on for no reason are totally irrational, exhausting and depressing but the best thing you can do is ride them out. To know that they are TOTALLY normal, incredibly common, and also out of your control, makes them easier to manage. Hit the bath, shower, take a baby-free time out or go for a walk and just cry them out. I would often phone my sissy (OBB2) and say “Why the f*%k did you not warn me about this? I would have taken unprotected sex a lot more seriously!!”.

There were so many times that I wanted to chuck in the boobing in the beginning. The one night I totally lost the plot and reversed out of the driveway in search of formula at 10pm. I drove over everything in my path; dog dishes, water bowls, flowers, and nearly into the fence. As I skiddied out of my driveway, on what felt like two wheels, I realised that all I actually need was to calm the eff down and do a little adult activity so I drove for 30mins, went back to the house, apologised to my shellshocked hubby who was desperately rocking a screaming baby in his arms and plugged that sucker back on to the boob (the baby not the hubby).

The mental challenge of it was HUGE for me. I hated the feeling of being so trapped and alone with caring for my rat. It was solely my responsibility and I wanted to dick slap my hubby every time our child cried and his knee jerk was “maybe she is hungry!”. Are you f*%cking kidding me? All she has done today is suck the life out of me while I dream the day away of pooing alone, washing my hair and having a little look-see on what condition my ol’vagina was in … child-free.

In the early hours of the morning, when I was boobing, I did soooo much online shopping it was a joke. I also sharpened up on my Zulu vocab while I lay in bed, plugged into human life. Staring at my snoring hubby, I thought ‘I could definitely squirt breast milk into your open mouth if I aimed right’. Shitters, as I type I am reminding myself about what I am in for in 4 weeks time with round two. While I waxed the boobing, I just could not express. As soon as I watched the nipple get sucked into the void of the bottle, I would start crying like clockwork. The irony of it was that I was a diary cow but mentally it took its toll because I am also a socialite and the idea of being confined to the 3hr cut-off for feeding completely sent me over the edge on some days. So my backup plan was to just strategically leak the one boob straight into a container / bottle while the other was nourishing the mini me.

OBB2 | Struggled with round 1 but mentally was prepared for war on the milk supply.

My first rat was born at 35 weeks and I think this definitely played a role in the boobing struggle. Although she was a decent sized prem baby she battled to latch. Boobing for me was by far the biggest challenge of having a newborn.

I was absolutely DOGMATIC about the fact that I would breastfeed my baby. I was going to feed that kid via tit, come hell or high water. After her two week check up, I was told she needed to put on more weight and I should supplement with the F word (formula). I had my first mental break down; complete and utter failure as the first primary motherly job – breastfeeding – you soul destroying wanker. To top it off, my hubcap (hubby) just didn’t get it, “Give her formula, what’s the biggy?”. The “biggy” is I will literally kick you in the dick! The pressure to boob is huge – you are literally soley responsible for keeping your rat alive and to be told that what you are doing isn’t quite good enough is devastating. So for the first 4 weeks of her life I expressed like a crazy lady even with guests in my house. I would tap into the double breastpump, a friend had lent me, drink tea and chat over the monotonous suctioning sound of the pump giving it stick. Look it was slightly awkies for my chommies who came to visit; watching milk squirt out of my boobs while we discussed the weather and details of how I was coping with a newborn. But as I said, I was taking no prisioners, “come hell or high water”.

Oh and then of course I had to tackle two of the Soul Destroyer’s best mates:

1. Norman Nothing-To-Show-For: I had been attached to the pump for half an hour and when I looked down; a dismal 30mls of milk out of each boob! Cooooome on!

2. Ol’Spiller Maloy: After I had expressed a whopping 70 mls – someone rolls in and knocks the white gold over. One of the signifcant moments in my mothering where the life would drain from my face and what would return in its place would be the urge to murder!

With a top up of 100mls of the F word every night, nipple shields, skin-to-skin, not leaving the house (literally) for 2 weeks solidly, expressing every chance I got to stimulate milk supply, slotting fenu greek tablets like they were jelly beans and drinking way more Milk Stout then what was recommended, I eventually got the boobing waxed only to discover that my 3.5 month old baby, who was lacthing like a champ, had a little sister on the way.

I fed her for the last time at 5 months. With morning sickness, my boobing time had come to an end and there was not a stuff I would even attempt to tandem feed like the paed suggested (Amazing that our bodies can do that though).

Our advice on the boobing front.

Set yourself realistic goals for boobing and honestly take it day by day! The convenience of it is also insane and the better you get at it the easier it is to do. The benefits for your new human are also quite phenomenal so challenge yourself a little and when you are ready to give it up … try it for one more week. Before you know it, you might have pleasantly surprised yourself and reached the World Health Organization’s recommendation of 6 months.

Don’t go out and buy a breast pump that you might not even use. Test a mate’s out first and see if it is something you could rock first before you go and blow potential post-boobing jolling money.

Cut yourself some slack because it isn’t an innate thing, in our humble post-boobing buggeredbreasts opinion. So maybe get someone to teach you the ropes or show you a few techniques like lying down and boobing, or rugby balling that rat for the boobs that are a little squiff and hang off in a fish-eye direction.

Best is breast for sure but also don’t beat yourself up about it if you can’t cut it as there are many perks to formula too like assisted feeding or topping them up. Hopefully, if you are more chilled about boobing and know that it is something that you need to get your mind and body in the game for you, it won’t be as much of a challenge the first time round.

Your diet plays such a big part of it too and while your ass might take a beating on size for awhile, eating properly keeps your boob juice quality rocking and rolling.

Every child is different so roll with that and do it confidently.

So the one question we get asked the most, and for blady good reason haha, is when is the best time to ‘phuza’ (drink alcohol) when you are breastfeeding?

We turned to the La Leche League on this one. They are some strict mofos on boobing but this made perfect sense to answer the question.

Alcohol passes freely into mother’s milk and has been found to peak about 30 to 60 minutes after consumption, 60 to 90 minutes when taken with food. Alcohol also freely passes out of a mother’s milk and her system. It takes a 120 pound woman about two to three hours to eliminate from her body the alcohol in one serving of beer or wine…the more alcohol that is consumed, the longer it takes for it to be eliminated. It takes up to 13 hours for a 120 pound woman to eliminate the alcohol from one high-alcohol drink. The effects of alcohol on the breastfeeding baby are directly related to the amount the mother consumes.”

When is the best time to pump?

If you need to know more, take a look at the full article: https://www.ameda.com/milk-101-article/when-and-how-long-to-pump/

*Obviously the above, and anything said in this blog or website is our opinion and should not be taken as medical advice.